I’ve inaugurated a new video series, on detective games. The inaugural video is an extended version of this old conference presentation, buffed up with new examples and more extensive sources. The second video will be arriving shortly—I knew I’d be super busy as soon as all three of my current jobs kicked in, so I planned ahead and worked on two videos simultaneously during the summer months, both of which I’m hoping to get out the door in September.

END_OF_DOCUMENT_TOKEN_TO_BE_REPLACED 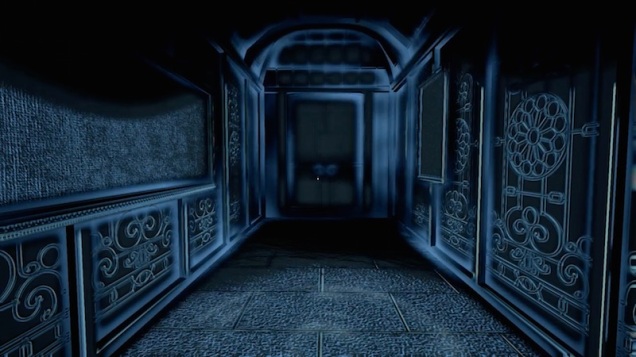 I’ve written about synesthetic interfaces before: that is, interfaces that perform a sensory substitution, translating the information normally associated with one sense modality into the phenomenal forms normally associated with another. In my previous work, I’ve usually focused on forms of nonhuman perception and certain modes of perceptual expertise. The release of Perception (The Deep End Games, 2017) yesterday, however, gives me an opportunity to dip into a new topic: disability.

Perception is a horror game about a blind woman exploring a haunted house. Unlike a game such as Papa Sangre (Somethin’ Else, 2010), however—an experiment in audio-only digital game design that has sadly been taken off of the iOS App Store as of this writing—Perception doesn’t court blind and other low-vision players. Rather than featuring robust, binaural sound localization simulation, Perception re-imagines the auditory perception of its blind protagonist Cassie as a kind of sonar vision, thrown up on the player’s screen in spooky, warbly monochrome.

This isn’t the first time games nominally about blindness have been served up to sighted players. In this post, I take up a comparative investigation of Perception alongside Beyond Eyes (Tiger and Squid / Team17 Digital Ltd, 2015), which drops the horror angle in favor of child-friendly, colorful adventure.