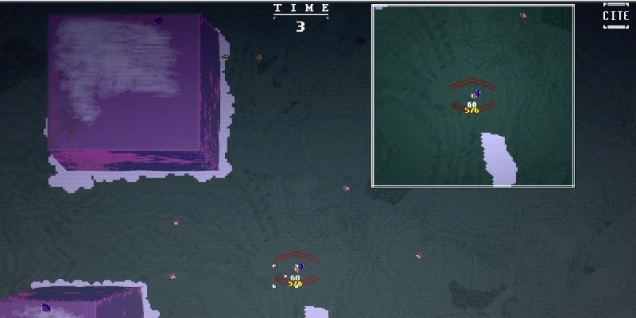 Earlier this week, I sat down with some friends to play David OReilly’s Everything (2017). We were all suitably hyped, and ready for an evening of being different things while chuckling over the political indefensibility of object-oriented ontology. (Yes, really. We’re those people.)

But our evening hit a snag. Somewhere along the line, in our first playthrough, beginning as a cougar, we encountered a weird bug. One of the little “gain a new ability” thought bubbles failed to pop up in the environment. No matter how far we traveled, or how many objects’ thoughts we listened to, we simply could not unlock the ability to scale up or down into bigger or smaller entities. We were doomed to be a cougar. (Or, cougars, rather. We were able to expand our ranks, and become about a dozen cougars, rolling across the rocky landscape. But being a dozen rolling cougars is small consolation in a game that promises that you can be, well, everything.) For 75 minutes, we wailed at the screen. “I thought you could be lint particles and galaxies and stuff!”

We tried, to no avail, to look up walkthroughs for Everything. Everywhere we looked, we found glowing reviews of how chill the game was, how it allowed you to sit back and let the experience of being everything wash over you. We couldn’t fathom how we got stuck in a game with no real objectives. To pour salt in the wound, the game seemed to be actively mocking us. “As long as you keep moving, in any direction you choose,” thought a tree, “that will take you where you need to go.” “Over time,” thought a rock, “you might find there’s no right or wrong path to take here.” We were seriously stuck, and the only feedback we were getting were Zen aphorisms that told us to take it easy and not worry so much.

Eventually, we deleted our save file and started over. Thankfully, this solved the problem, and we spent the rest of the evening enraptured. But it did get me thinking about the trickiness presented by purposefully inscrutable game design.

END_OF_DOCUMENT_TOKEN_TO_BE_REPLACED

This post is part of a series that borrows the term process genre from Salomé Aguilera Skvirsky’s work in cinema studies, and explores its utility for videogame analysis. A quick definition: “process genre” films are films about labor, films that focus on processes of doing and making, that are fascinated with seeing tasks through to their completion. They are deliberately paced, meditative, and often political, in that they cast a penetrating eye on labor conditions. Are there games that the same chords? Posts in the series so far can be seen here.

The games that I have dealt with so far in this series—Shenmue, Papers, Please, and Cart Life—all enforce some sort of time pressure on their players. They don’t operate in any sort of 1:1 “real time” (their workdays last in the range of 5–45 minutes), but they do have their own internal ticking clocks, enforcing a certain pace. Cart Life‘s accelerated workday doesn’t even go so far as to pause while players are navigating its menu screens.

Skulljhabit (Porpentine, 2014) breaks this trend. It was made in the interactive fiction platform Twine, so player activity consists of clicking on hyperlinks, sans any ticking clock. It is bound, in this way, to the constraints of its platform. But what Porpentine achieves within those constraints is nevertheless quite remarkable, pointing toward the outer limits of how we can think about labor in videogames.

END_OF_DOCUMENT_TOKEN_TO_BE_REPLACED

For those of you who aren’t in the know, “whoami” is a command that was first implemented in Unix-based systems, allowing the user to see what account, with which types of access, they are currently recognized by the machine as being logged in under.

This post offers two quick takes on two games. (They both happen to be from 2012, for whatever reason—something in the water?) While playing both of them, “who am I?” is a surprisingly rich one. Sometimes, they keep the player’s role vague, surprising them with the amount of agency they have, and the degree to which they seem to be inside or outside the game’s story. Other times, they are quite clear on who the player “is,” but leave plenty of room for interpretation as to what occupying this role means. Take care below: spoilers aplenty.

END_OF_DOCUMENT_TOKEN_TO_BE_REPLACED

What follows will be quick, because I did not spend an entire day on Martina’s Playhouse (1989) when I taught it in my “Avant-Garde Film and Video Art” course. It shared a day with Gunvor Nelson and Dorothy Wiley’s Schmeerguntz (1965) and Nelson’s My Name Is Oona (1969), for a week themed around parenthood.

I assigned Ahwesh’s interview with Scott MacDonald as reading for this week. I was interested in what sort of reactions the prominent child nudity and role-play in this film would provoke, particularly given that, all things considered, the events we see onscreen aren’t all that strange. (MacDonald puts it well when he reminisces that “The minute I would turn on my little Super-8 camera to make home movies, two of my boys would drop their pants … Any parent sees that kind of nudity all the time.”[i]) There is, however, a real difference between private family moments and public exhibition, and I was hoping that my students had some strong reactions I could bounce ideas off of.

END_OF_DOCUMENT_TOKEN_TO_BE_REPLACED

In my fall 2016 course “Moving Images and Arguments,” a survey of rhetorical techniques across cinema (including plenty of documentaries and essay films), video art, and videogames, I devoted two separate class sessions to the theme of “Ironic Narration and Lying Photographs.” What follows is the first. (I’ll be posting the second later.)

One learning objective for this week was to get students thinking critically about where, exactly, the “lies” come from in photographs that we consider untrustworthy. To this aim, I assigned “Two Futures for Electronic Images,” a chapter from D. N. Rodowick’s The Virtual Life of Film, as reading. I also directed students to the website for “Altered Images,” the Bronx Documentary Center’s exhibition of manipulated documentary photography, to peruse the images and stories collected there. My second learning objective, though, was to slide away from issues of documentary and “lying,” toward issues of humor and irony. Where do we draw the line between lies that are meant to deceive, and lies that are meant as entertaining winks?

END_OF_DOCUMENT_TOKEN_TO_BE_REPLACED

Bruce Conner’s A Movie is one of my favorite films to teach. I’ve taught it while covering theories of editing in an Introduction to Film course, I’ve taught it for a course on cinematic rhetoric, and I’ve taught it in courses on the history of American avant-garde cinema. I’ve been lucky enough to teach at a school that had a good-quality 16mm print of it in its collection, and since then I’ve made frequent use of a MPEG-4 rip of a VHS copy of that print (formats upon formats!). It’s less than ideal, but the poor image quality never seems to diminish students’ fascination with it.