What follows will be quick, because I did not spend an entire day on Martina’s Playhouse (1989) when I taught it in my “Avant-Garde Film and Video Art” course. It shared a day with Gunvor Nelson and Dorothy Wiley’s Schmeerguntz (1965) and Nelson’s My Name Is Oona (1969), for a week themed around parenthood.

I assigned Ahwesh’s interview with Scott MacDonald as reading for this week. I was interested in what sort of reactions the prominent child nudity and role-play in this film would provoke, particularly given that, all things considered, the events we see onscreen aren’t all that strange. (MacDonald puts it well when he reminisces that “The minute I would turn on my little Super-8 camera to make home movies, two of my boys would drop their pants … Any parent sees that kind of nudity all the time.”[i]) There is, however, a real difference between private family moments and public exhibition, and I was hoping that my students had some strong reactions I could bounce ideas off of.

My students did not disappoint. Reactions posted on the course discussion board the night before class revealed a wide spectrum of unease. Martina’s mother’s actions while role-playing, encouraging Martina to mime breastfeeding with her, were characterized as “disconcerting” behavior that students felt “disturbed” by. One student reported being “left nervous and uncomfortable” by the film. Another said, “I felt like I wasn’t supposed to see what was on the screen.” One student dug deeper into the source of her anxieties, pointing out that in the film “we see a sexual side to a young girl which is often shied away from in documentation of childhood,” with the result that what we see “strikes us as wrong even though it is play.”

I brought this idea of the “sexual side of childhood” up during class discussion, and the opinion in the room was more or less unanimous. Students found Martina’s behavior to be disturbingly sexualized. I wanted to dig deep into why, exactly, this was. As MacDonald points out, children get naked quite often. For the most part, we understand a non-attachment to clothing, as well as a tendency towards roll-play and a fascination with all things “adult,” to be an unremarkable part of human development. Is there something different, though, about seeing this behavior on a screen, in a collective setting?

Students agreed that there was. And, of course, the specter of child pornography reared its head: especially in the US, images of child nudity are subject to extreme suspicion, as evidence of deviant sexuality and possible child abuse. (Ask yourself: In 2016, what other images are considered illegal to possess? For the most part, Western society has grown out of its other iconophobic taboos.)

The shadow of child pornography is an obvious and potent source of discomfort. But I wanted to push things further. I showed the first few minutes of the film (fast-forwarding through some parts, showing just enough for the students to get a sense of its order), and asked students if they could imagine a different organization of the material … and whether that organization might have a different effect on the viewer. For reference, these are the first ten sections of the film: 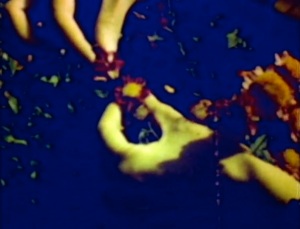 Here, I pull attention to the figure of Jennifer Montgomery. It’s not immediately clear what she’s doing in this film, at all. What, I ask students, is the relationship between Montgomery and Martina? Generally, they recognize that the two form mirror-image foils: Montgomery’s behavior seems infantilized (though still very sexual), and Martina comes across as sexual (although she is an infant).

But then I ask students to imagine Ahwesh in the editing room, and the different organizations that this material could have fallen into. How much, I ask, is our reading of Martina’s behavior as sexual primed by the fact that we have first seen Montgomery’s come-ons before we arrive at Martina’s baby-and-breastfeeding roleplay? Here, I like to put forward one of the classic thought experiments dealing with the primacy effect.[ii] Consider the following list:

Notice how the word that doesn’t fit with the set changes, depending on which one we hear/read first? I encourage students to think of Ahwesh’s editing strategies as a way of toying with our associations in this manner, re-arranging the material to provoke the reaction she wants.

If Ahwesh wanted to make a film primarily about the infantilism of adults, she would have started with Martina, and then moved on to Montgomery. Martina’s behavior might have still struck us as odd, but its context would have been different, as we wouldn’t have the swirling mass of associations leading up to Martina’s most noteworthy acts of exhibitionism.

But that’s not the film Ahwesh wanted to make. She very much wanted to make a film about childhood sexuality. That’s why, before we see some of Martina’s more outré behavior, we are first primed by the Bataille, by the Lacan, and by Montgomery’s flirtatious exhibitionism. Seeing Montgomery first act childish and sexual helps us read Martina’s behavior as both childish and sexual, as well.

That’s all of the film I had time to cover in class, but, in case you’re curious, here is my breakdown of the film’s remaining sections: