In the past 12 months, three full-motion video adventure games were released. The big tech companies are in the midst of a full-on push to get us to strap VR headsets to our face. And Hidden Agenda (Supermassive Games, 2017), specially crafted to highlight Sony’s brand new PlayLink system, looks for all the world like an evolutionary outgrowth of I’m Your Man (Bob Bejan, 1992), Loews’ experiment in audience-polling interactive cinema.

To quote a 1990s-era television series that itself returned in 2017: What year is it? Because it certainly seems that the game industry is partying like it’s 1993. At this rate, it’s astonishing that we haven’t seen the release of a “3DO Classic” console to accompany the SNES Classic Edition.

I have been observing this trend more than I have been directly participating in it.(Despite positioning myself as a scholar specializing on the intersection of cinema and videogames, I haven’t yet gotten a group together to play Hidden Agenda, and I’ve fallen behind on the stead stream of FMV games.) Still, though, the trend has been noteworthy enough to comment upon as the year wraps up. Below the fold you’ll find two capsule reviews of things that piqued my interest.

PsychoNauts in the Rhombus of Ruin

2017 is the year I finally pulled the trigger on a VR headset. I went with the lowest-cost option, in the form of PSVR. The maddening degree of hardware exclusivity in the current VR game market means that I’ve missed out on some notable titles in this fledgling area—I heard great things about the Oculus Rift’s Lone Echo (Ready at Dawn, 2017), for instance, but will likely never play it.

My vantage point on the current state of the VR phenomenon is highly constrained, then, and I can’t speak authoritatively. But of course I’m going to play any PsychoNauts game that comes out, and I might as well write a few words about it once I’ve done so.

From what I’ve been able to observe, it seems like the game industry is having a hard time adapting movement and the staging of action into VR. Teleportation between constrained viewpoints seems to be the norm. And although I’m fascinated by these struggles from a media poetics point of view, they do provide a set of constraints that developers don’t seem to have fully adapted to yet.

Rhombus of Ruin suffers quite acutely from these issues, tying itself into narrative knots to try and explain why movement and interaction in this short stopgap experiment are so different from what players are used to from the original PsychoNauts. Honestly, it wasn’t worth the trouble. No matter how much exposition is dumped out to explain why Raz must now zip his consciousness into the bodies of passing fish (really), Rhombus of Ruin never really feels like a PsychoNauts “game.” It feels more like a PsychoNauts 360º tie-in movie.

But you know what? It is a really good 360º tie-in movie. Even if they didn’t master the art of crafting a VR adventure game, Double Fine have proven themselves to be exceptionally adept at visually staging VR experiences. Their already eye-catching art direction really pops in a full three dimensions. And the “dollhouse” sections near the game’s conclusion are a true delight. The play with embodiment and scale is truly revelatory, providing some real medium-specific pleasures. I would pay good money to peer into a Double Fine-designed virtual dollhouse, without any puzzles or pyrokinesis combat tacked on.

We’re clearly still in the early, growing-pains days of VR game development. If nothing else, though, Double Fine have proven themselves to have a canny eye for VR staging, even if the game mechanics aren’t completely there yet.

The Infectious Madness of Doctor Dekker

Her Story (Sam Barlow, 2015) was something of a masterpiece. But beyond being a great game, it accomplished something that few would have imagined possible: it resurrected the full-motion video adventure game, which many had assumed died an agonizing death two decades ago.

This resurrection started slowly, with games like Contradiction (Baggy Cat, 2015) and The Bunker (Splendy Interactive, 2016) trickling out in Her Story‘s early wake. But 2017 seems to be the year when the dam truly broke, with the triple whammy of Press X to Not Die (All Seeing Eye Games, 2017), Late Shift (Ctrl Movie, 2017), and The Infectious Madness of Doctor Dekker. Vintage FMV titles got re-releases, as well. A revamped version of Tender Loving Care (David Wheeler/Aftermath Media, 1998) hit both GOG and Steam. Even Night Trap (Digital Pictures, 1992), the longstanding poster child/whipping boy of terrible early 1990s FMV games, got a spit shine job.

The Infectious Madness of Doctor Dekker is the only 2017 release I played of this bunch, namely because it’s the most ambitious. In Doctor Dekker, you take over counseling duties after the eponymous Dekker, a therapist, has been murdered, possibly by one of his patients. As you sit through your sessions, letting your patients talk, you begin to realize that Dekker had a very unorthodox approach to mental illness: he encouraged his patient’s delusions rather than discouraged them, and in the process maybe-sort-of granted them supernatural powers.

You discover all of this not by pointing and clicking, but through a text parser interface, which handles natural language fairly well. It’s quite possible to slip into a comfortable conversational volley with your patients, aided by the inherent “script” of therapy sessions. Whenever I found myself fumbling, I could usually get back on track by following “ELIZA rules,” casting myself as ELIZA. The game’s script is organized so that the tail end of a patient’s answer suggests the next question, which could simply be the same words with a question mark appended. For example:

Claire: Being rich has its perks … but, honestly, I would give it all up in a heartbeat if it could free me from this madness.

Claire: I’m in a bit of a predicament, Doctor. I’ll get to that.

Me: What sort of predicament?

Claire: Well, according to your predecessor, I’m a delusional psychotic with obsessive tendencies. Oh, and a history of violence. It sounds so cold when you put it like that, though, doesn’t it?

Me: A history of violence?

Claire: To be fair, there was only one violent outburst. That hardly qualifies as a history of violence. And, he provoked me.

Me: Who provoked you?

Claire: It was a brief moment of temporary insanity. Or temporary clarity. I’m not sure which.

Even when the wires do get crossed, the game’s flubs can still be interesting. At times, the construction of the script and the flags needed to get from one bit of dialogue can make a character sounds suspiciously defensive, which comes across as more of a “tell” on their part than a short-circuit on the game’s part:

Jasmine: He was shy. And then … less so. When I told him about my problem, he told me to set fire to it.

Jasmine: Yeah … he could have been more specific. I tried set fire to Providence. At that time, I thought the only way to fix my problem was to set fire to the entire art gallery. Several paintings didn’t make it. Luckily, my boss didn’t press charges. The police did arrest me, though.

Me: Your boss didn’t press charges?

Jasmine: My boss, Petra. She’s just lovely like that. Providence has gone through some tough times, and I’ve only been there for a year. She invested her life’s savings, and it’s still not making any money. Such a sweet lady. You’d do anything for her.

Me: Providence Gallery was losing money?

Jasmine: No! Why are you saying that? I don’t even know if Petra has insurance! 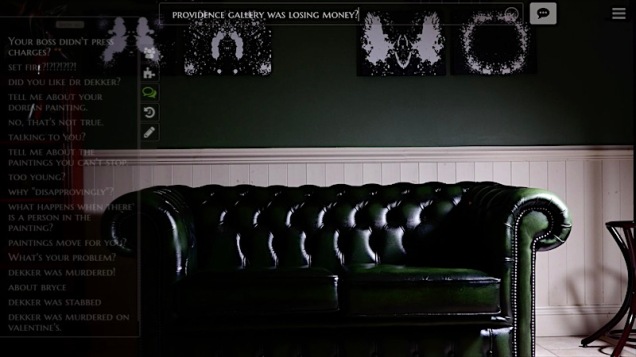 The only real complaint I have (beyond the natural-language interaction not always working, which I suspect isn’t a solvable problem yet in 2017, and which is alleviated nicely with a “suggested questions” feature to help you when you’re stuck) is that the game feels more like a radio play than a visual affair. Despite the obvious care put into the game’s sparse mise-en-scène, you’re only ever interacting with the script, rather than what you see. For instance, the character Marianna always wore an octopus necklace, throughout all of the costume changes she went through on each of her sessions. But asking her about it goes nowhere—an unfortunate oversight, given that 1) Marianna herself is a jeweler, and 2) her story ends up going in some distinctly Chtulhu-y directions.

Anyway, if my observations about videogaming in 2017 are anything to go by, I’d recommend dropping all your Bitcoin, and investing in Pogs. Or maybe saxophones and trombones. Ska’s due for a fourth wave right around now …